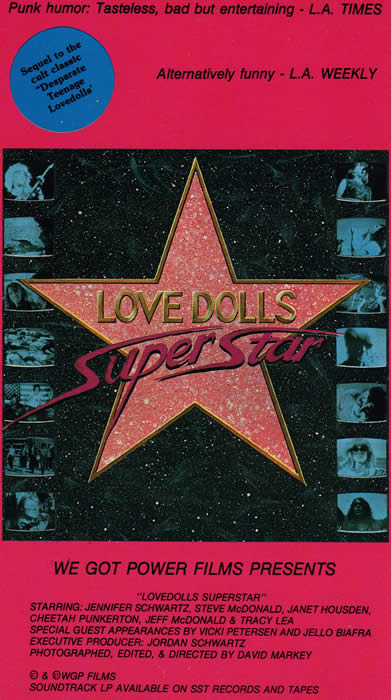 The original 1986 VHS release of "Lovedolls Superstar" on SSTv

"Lovedolls Superstar" was produced from the profits of "Desperate Teenage Lovedolls" by the collective We Got Power Films (helmed by David Markey & Jordan Schwartz). The original version of the film was released in 1986 on VHS by SST for the exhorborant price of $47.00, a fact the filmmakers were never pleased with. Studio movies available on VHS at the time were retailing at an average of $80.00 per title.  Needless to say only about 400 copies were originally sold, at least according to the "creative accounting" of the notoriously shifty SST Records. We Got Power Films eventually made the film available on VHS for the more reasonable price of $22.50.  VHS were bulky, and did not have the instant marketability (and low price) of DVD's, nor did they have the bonus features which are now considered commonplace on DVD.

Although it was shot on film, the original release was produced from a several generation loss of video tape. The Super-8 sound film was transferred to then then industry standard of 3 1/4" inch pnuematic tape. From there it was edited down on a tape-to-tape edit system, yeilding another generation loss. This tape was yet again transferred to a final 1" video tape master, which was finally replicated to VHS.  The end result was a flickering washed out mess of a picture. Super-8 film transfers themselves were dodgy at best in this era, using a chain pulled film projector beaming into a video camera (which was also technically lo-fi.)  The audio was also a problem; with the music source originating from casette and the lower than lo-fi magnetic sound stripe located on the edge of the Super 8 mm film gauge, often capturing the shutter sound of the Super-8 camera itself.  Those camera's were loud!

This said, it was a miracle the film was available commercially (however under-underground), and was seen at all.  All this techincal stuff seemed to take a back seat to the film itself.  It did not matter to the people buying it that the film did not look or sound like a Hollywood movie.  This was Anti-Hollywood, High-Art, or at least a Post Punk movie to watch while you were high. The film was accompanied and aided, (no doubt) by a hot soundtrack LP and a (brand new format at the time) CD featuring the cream of the crop of US post-punk; Black Flag (of course), Dead Kennedys (this was the only DK's appearance on SST), Sonic Youth (who were signed to SST at the time), as were the Meat Puppets and the rest of the bands on the compilation, save for Redd Kross, The Lovedolls (who were now a "real" band), and Anarchy 6. The scene featuring Sky "Sunlight" Saxon (of the Seeds) was cut from the SSTv version of "Lovedolls Superstar", due to the fact Saxon was freaked out by what he perceived as "Charles Manson worshipping" going on at SST at the time.  Sky Saxon was restored to the film, along with the picture and sound from the original negative, for the "Lovedolls Superstar Fully Realized" dvd in 2004.